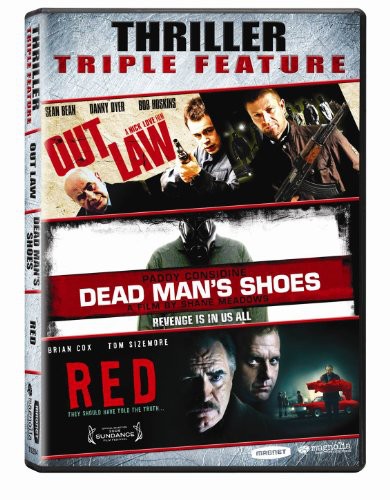 Outlaw-A group of ordinary men form a modern day posse to right what they believe are the wrongs of society. Returning from a tour of duty in Iraq, former paratrooper Bryant (Sean Bean) is appalled by the crime that runs rampant and unchecked. Determined to do something about it, he assembles a group of like-minded men who resolve to restore the balance between good and evil by enforcing justice with a brutality equal to that of their enemies. Dead Man's Shoes-Richard (Paddy Considine) has always protected his simple-minded little brother Anthony (Toby Kebbell). When Richard leaves the rural village where they have grown up to join the army, Anthony is taken in by Sonny (Gary Stretch), a controlling and vicious local drug dealer, and his gang. Anthony becomes the gang's plaything and is relentlessly tormented and ridiculed. Seven years later, Richard returns to settle the score. One by one, he hunts down each member of the gang and executes them in increasingly elaborate ways as flashbacks reveal the extent to which his brother suffered at their hands. Red-Avery (Brian Cox), a reclusive older man, has a best friend in his dog, Red. When threeteens kill Red without reason, Avery sets out for justice and redemption, attempting to follow the letter of the law. But when the law fails him, and the boys' father (Tom Sizemore) clearly defines right and wrong in his own way, Avery must avenge himself by any means.